Blue Dream Palace hotel is located on the most exquisite region of Thassos as it is built on the wonderful Tripiti beach of Limenaria. This hotel is famous for its exceptional level of services as well as its catering and recreational facilities. It combines harmoniously discrete luxury and authentic quality….

The hotel operates from mid-April till mid-October. The hotel complex is built in such a way so that all rooms have sea view. Blue Dream Palace has also an infinity pool, a pool for children, an indoor pool with Jacuzzi, a beach bar, a pool bar and 2 playgrounds. At the main swimming pool and at the beach bar as well, there are sun beds, umbrellas and towels. The pool is open all day. The hotel also offers the following facilities and services: 24 hour reception, 24 hour room service, lobby with TV, lobby bar, laundry and ironing services, 2 elevators, sunbeds and umbrellas on the beach, air-conditioned public areas, multilingual staff, private parking lot, luggage room, wi-fi, internet corner, playroom, mini market, meeting room, a reception hall, a tennis court and a beach volley. The Swan Spa offers amazing healing and rejuvenating face and body treatments , using only cosmetic Germaine de Capuccini, one of the most recognized skin care company in Europe. You can also have a steam bath, hamam or massage treatments. The hotel offers a very large room, fully equipped, as well as professional staff, to ensure the success of every social event. It can satisfy and accomplish one requests for weddings, baptisms, and club/school/group meetings. The hotel also guarantees the successful organization of conferences and seminars as they offer a fully audio-visual digital equipment.

Zoe Hotel is a complex of 12 buildings and it offers an amphitheatrically view of the Aegean Sea. Guest of ZOE Hotel can join the facilities of Blue Dream Palace with special prices….

The hotel offers Superior and Deluxe rooms, all with individual air-condition, mosquito net, balcony or terrace with garden view or sea view, telephone, fridge, hair dryer, tv, bathrobes and slippers. The Family Deluxe rooms have two separate bedrooms with connecting door: main room with 1 double bed, second room with 2 standard single beds. Pets are allowed, up to 10 kilos and always on request from the hotel. 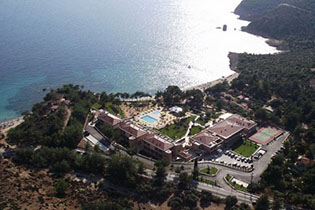 Beautifully located in the depths of nature amongst the perfect blend of green hills, golden sand and blue sea, a small paradise is waiting to welcome you with the hospitality you deserve. Royal Paradise Beach Resort & Spa is a new five – star hotel, where luxury competes with high quality services….

A five star hotel, with luxury and quality services, offers you the holidays of your dream. All rooms offer the most perfect and elegant equipment: satellite TV, mini bar, safe, internet, telephone, hairdryer, balcony or veranda. Remark: lunch and dinner are served with menu choice and in gourmet style. The water in the pools is salty. The extra bed varies among armchair (1,70 x 70), poof (2,10 x 80) and sofa (1,80x 80). From the summer of 2016 the clients of this hotel may enjoy unique outdoor relaxing treatments at the new gazebo, amid nature & in front of the sea. After swimming in the pool or in the sea, the visitors may enjoy light dishes, inspired by Greek flavors & local ingredients, lovely prepared in the hotel’s newly open-air kitchen next to the pool bar Aeolos.

Kallisti Apart Hotel is located 25 km from the port of Prinos and 45 km from the port of Thassos, built on a hill full of olive trees. Situated in San Antonio beach, gazing the Aegean Sea and the beaches, this hotel is based on bioclimatic architecture, in perfect harmony with the natural environment, just one kilometer away from the picturesque center of the village Potos. A pool with waterfalls, a restaurant, a spa as well as a mini gym are some of hotel’s services and facilities….

The hotel offers also reception, bar, garden and parking. Outside the hotel at 200 meters there is a bus stop and the nearest beach is 400m away. The studios and apartments of this hotel have A/C, balcony, kitchinettes, toilet, flat screen TV and Wifi internet. Kallisti Hotel is located among olive trees, in a spot with great climate and panoramic sea view. 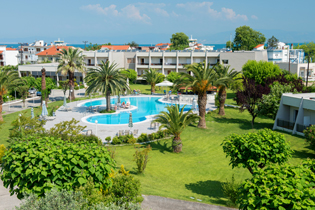 The hotel is located in the town of Thassos, also known as Limenas, built in a garden of 11,000 sq. meters, including a children’s playground, tennis court, parking area, swimming-pool and pool-bar where clients can enjoy the sun while sipping exotic and refreshing cocktails….

The rooms are spacious and completely equipped with air conditioning, refrigerator and TV, offering you a comfort and pleasant stay. Beautiful  garden with colourful flowers and palm trees, a swimming pool and pool bar are at the disposal of the clients. Within walking distance there are several shops and taverns. 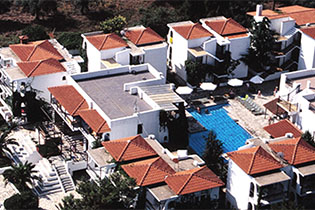 Esperides hotel, an elegant and traditionally styled white-washed resort, is a complex of eight units of studios and suites, situated at different levels in perfect harmony with the environment, offering a friendly destination for holidays. The spaces of accommodation are well appointed, individually furnished, each one offering private balconies….

In all rooms and suites comforts such as, tv, refrigerator, safe deposit, and air conditioning are offered. The standard rooms are all in groundfloor. Esperides Hotel also has a restaurant, lobby bar, as well as a poolside bar serving refreshing drinks and cocktails. Pets are allowed free of charge. Important remark: Some Premier and Standard rooms may have older furniture while some other such rooms may have newer furniture. The standard rooms offer mountain view while the superior rooms have direct sea view. The types of rooms differ in the type of furniture they have and their position in the complex.

Among the long-age olive trees in the region of Rachoni in Thassos, in a 4000 m2 property, Hotel Filippos can ensure visitors a peaceful and relaxing environment in which to enjoy nature’s tranquility….

Hotel Filippos consists of 30 rooms with phone, refrigerator, air condition and bathroom. Every room has its own balcony where the clients can enjoy the afternoon breeze that comes from the shade of the big olive trees. Every morning breakfast is served at the restaurant, and in the tavern you will find traditional Greek foods made from the best ingredients.

Natasa Hotel is located in the beautiful Thassos Island, on the ring road Potamia – Scala Potamia, surrounded by olive groves and 800 meters from the sea….~

Hotel Natassa has a swimming pool, a pool bar to enjoy a coffee or a refreshing drink and relax, a restaurant and a parking. Also for the younger guests there is a playground.

Thassos Hotel is a family hotel located on the sunny coast of Pefkari (Limenaria area). Only few meters from the beach, the complex combines successfully the warmest hospitality and the friendliest service that will truly make your holiday experience remarkable….

Hotel Thassos is a beautiful hotel with greenery surroundings about 30 meters from the bay with its sandy beach and crystal clear waters. It offers 48 guestrooms nicely decorated all with balcony and with convenient services for your pleasant stay. The hotel’s restaurant will serve Greek specialties and small snacks all day and the pool bar refreshing drinks, while you enjoy the sun on the terrace next to the swimming pool.

Use the search box to find the product you are looking for.

Nici un produs in cos